A LITTLE BIT ABOUT US

Ripley Group, started its operations as Private Limited Company, from Paradip Port and handled first vessel that berthed at Paradip. From the very outset the Company had set itself apart in terms of its focus, positive work culture and innovative outlook. Within a short span of time, it made its mark in India’s logistics sector. The Group engaged in adopting state of the art technology along with upgrading skills, with an aim to take India’s logistics industry to the next level, offering the best and futuristic services, challenging its own limits every day. Within a few years of its operations, Ripley had climbed up the ranks and established itself as one of Eastern India’s most reputed stevedoring / logistics companies.

Today, Ripley Stevedoring and Handling Pvt Ltd., headquartered in Kolkata with offices located in Haldia, Paradeep and Visakhapatnam has diversified into various lines of business and has established itself as one of the leading business conglomerates in the eastern region.

Our objective has always been to provide seamless end to end solutions to our customers, leveraging on our knowledge, experience and infrastructural capabilities. Most importantly, deliver timely focussed service and support, round the clock, with the help of our dedicated team of experts.

The group is proud of its association with 2 BOT terminals in eastern part of the country. While in Visakhapatnam, it has been a successful stint with Vizag Seaport Pvt. Ltd. (VSPL) which handles 8 million tonnes of cargo p.a. In Haldia, the alliance has been with International Seaports (Haldia) Pvt. Ltd which discharges 3.5 million tonnes cargo p.a. and it is also the first BOT Terminal in eastern India. 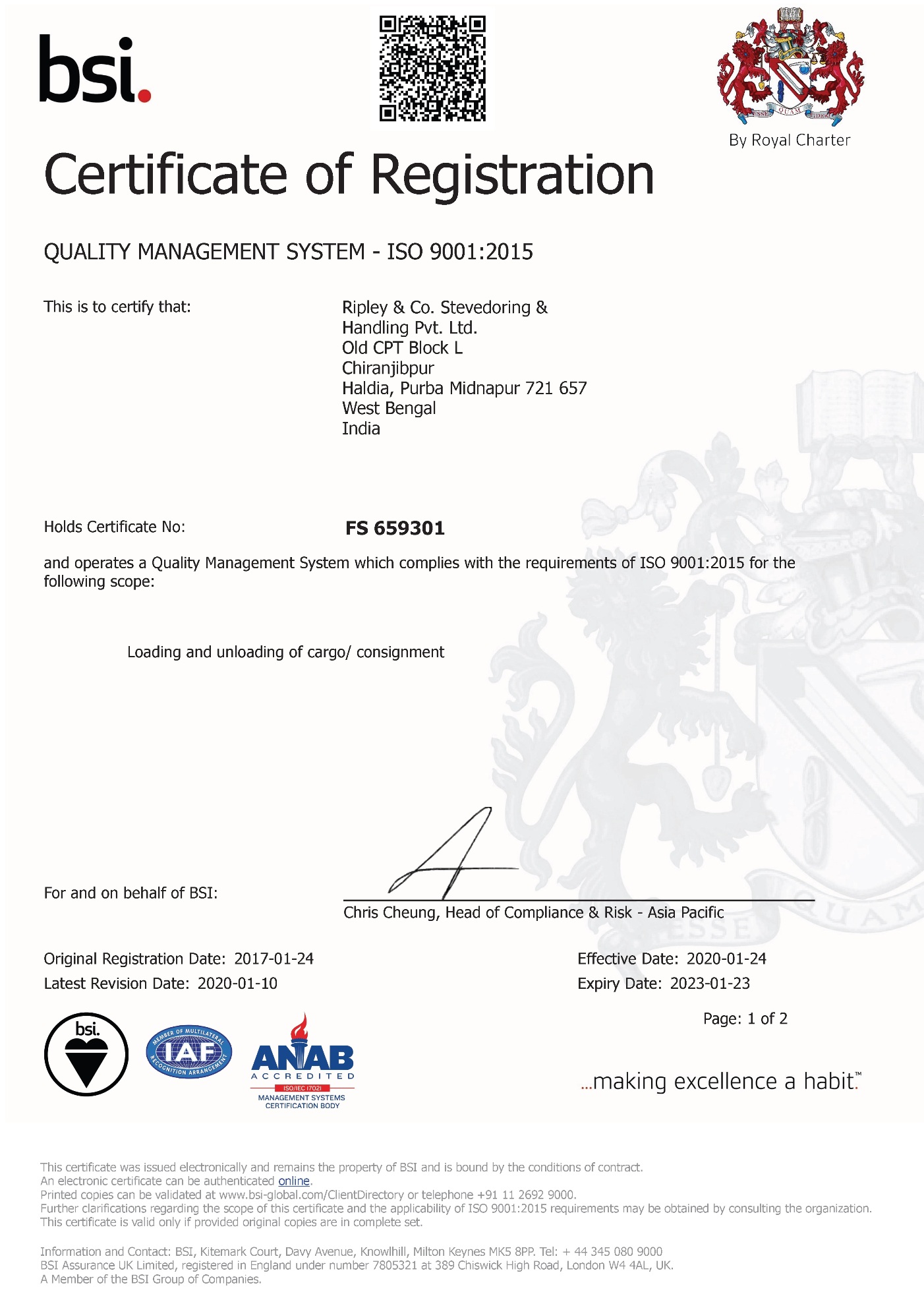 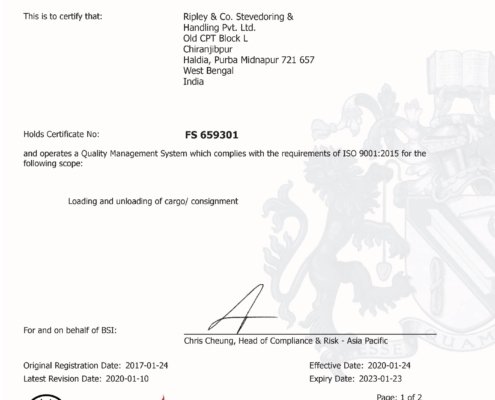 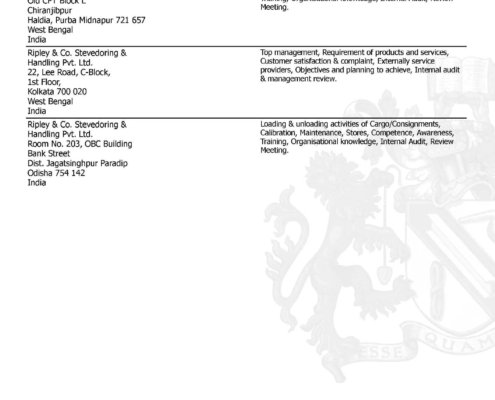 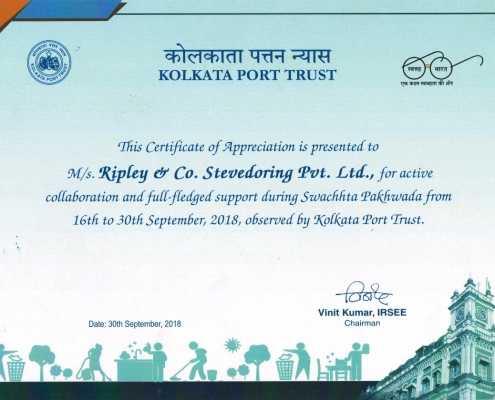 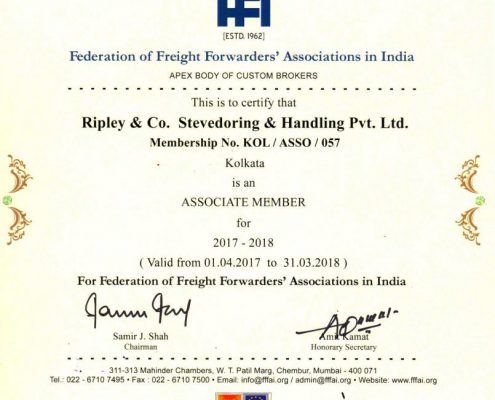 The company has recently been awarded A- (Stable) and A2+ (Outstanding) ratings by ICRA for short-term and long-term respectively.

The company has recently received trade mark in respect of name ‘Ripley’ and company’s published logo and have since obtained TM numbers with entitlements to use the letters ‘TM’.

OUR CORE BELIEVES AND MOST IMPORTANT VALUES

Integrity is basic foundation stone on which our Company was created and built painstakingly over the years with the efforts of all associated with us.

Respect for all its employees, partners and customers has been an important guiding principle of our Company and we believe that no relationship can succeed without courtesy and respect.

Integrity, respect and dedicated support & service, all go hand in hand to gain the trust of Clients as well as Employees. Our Company has been on this path for years and has established its goodwill in logistics fraternity.

It is not only the knowledge, expertise, hard work of each individual that matters. But it is the joint effort and teamwork, as we collaborate with our customers, supplier partners and each other, to achieve Company goals.

Technology is today ever changing and we are constantly adapting and innovating our equipment, services, and technology. we have set standards of excellence in quality of service and other deliverables which are the benchmarks we always try to achieve.

We strive to be a good corporate neighbour and active in our community, respecting geographic and cultural differences. These efforts and values not only encase our professional relationship with the community, but are also embedded in every department and stage of operation of our organization.

FIND OUR PRESENCE BELOW

This site uses cookies. By continuing to browse the site, you are agreeing to our use of cookies.

We may request cookies to be set on your device. We use cookies to let us know when you visit our websites, how you interact with us, to enrich your user experience, and to customize your relationship with our website.

Click on the different category headings to find out more. You can also change some of your preferences. Note that blocking some types of cookies may impact your experience on our websites and the services we are able to offer.

These cookies are strictly necessary to provide you with services available through our website and to use some of its features.

Because these cookies are strictly necessary to deliver the website, refuseing them will have impact how our site functions. You always can block or delete cookies by changing your browser settings and force blocking all cookies on this website. But this will always prompt you to accept/refuse cookies when revisiting our site.

We fully respect if you want to refuse cookies but to avoid asking you again and again kindly allow us to store a cookie for that. You are free to opt out any time or opt in for other cookies to get a better experience. If you refuse cookies we will remove all set cookies in our domain.

We provide you with a list of stored cookies on your computer in our domain so you can check what we stored. Due to security reasons we are not able to show or modify cookies from other domains. You can check these in your browser security settings.

These cookies collect information that is used either in aggregate form to help us understand how our website is being used or how effective our marketing campaigns are, or to help us customize our website and application for you in order to enhance your experience.

If you do not want that we track your visit to our site you can disable tracking in your browser here:

We also use different external services like Google Webfonts, Google Maps, and external Video providers. Since these providers may collect personal data like your IP address we allow you to block them here. Please be aware that this might heavily reduce the functionality and appearance of our site. Changes will take effect once you reload the page.

The following cookies are also needed - You can choose if you want to allow them: